Although each KFS eDoc is unique, there are some attributes and tabs that can be found in every KFS eDoc.

The Document Type Name is displayed on the top of the eDoc.

Information specific to the eDoc appears in the upper right corner.

Expand All and Collapse All

Every document body is organized into sections that resemble a stack of folders with tabs. Each eDoc displays tabs that groups fields that need to be filled out by the user. Pay attention to what tabs and fields are in your document. Some fields and other information will not become available until other required information is completed. 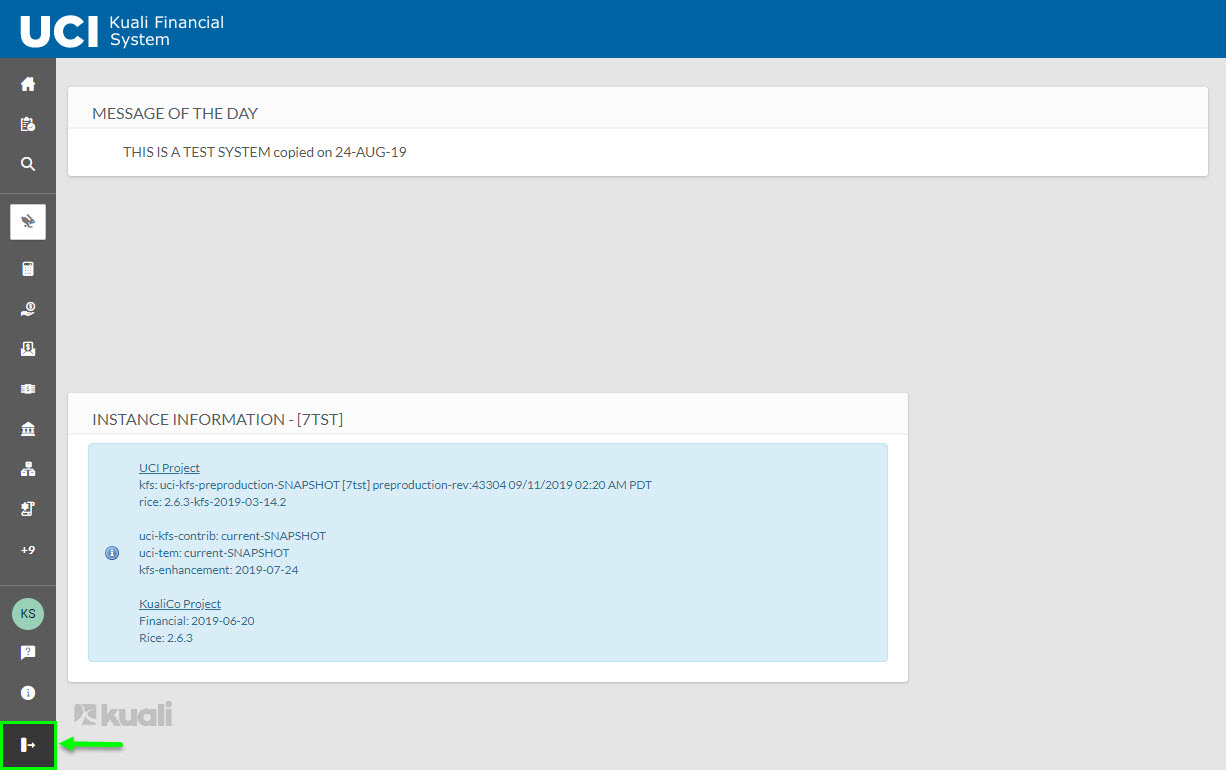 The EXPAND ALL and COLLAPSE ALL buttons will expand or collapse all tabs on the page.

When a tab is collapsed, clicking anywhere on the tab will expand it.

Action buttons appropriate to the logged-in user role are displayed at the bottom of the screen.

Although the Explanation Filed is not marked with an asterisk it is a required field and must be completed.
Selecting the Submit button before all required fields are completed will cause an error message to appear.

The Document Overview tab identifies the document and includes the following fields: Description, Explanation, and Organization Document Number. This tab is required.

UCI uses KFS Accounts and other Full Accounting Unit (FAU) codes to describe the attributes required for every KFS transaction. The FAU is used to classify the type, purpose, and unit being charged. It is used by departments to meet their reporting needs and is used by Accounting and Fiscal Services to run reports and financial statements.

If you're not sure how to complete the Accounting Lines, please contact your department's Finance Office or Fiscal Officer.

The Notes and Attachments tab displays user notes, attachments, or system-generated information about the document. This tab is optional.

(The Remove Attachment button will only remove attachments that have NOT been added yet.)

Notes and Attachments CANNOT be deleted or edited, because they become part of the original document record. DO NOT attach any sensitive data, private information, TAX ID, or Medical information (HIPPA).

﻿Backup documentation should be attached to the Notes and Attachments tab generally, except if the KFS eDoc has an Image Scanning tab (DV, TEM Transactions, PCDO). All backup must be uploaded into the Image Scanning tab, if the eDoc contains this feature. Be sure to redact any sensitive information before uploading.

For documents that DO NOT have an image scanning tab:

Backup documentation should be attached in the Notes and Attachments tab. The department is responsible for maintaining and retaining all internal records and logs for audit. This should include detailed information to support all transactions. Records may show the date, full accounting unit, name of user(s), etc.  (but should not show private or identity information).

The workflow of KSF allows eDocs to be reviewed and approved by required approvers. Required approvers vary for different eDocs, but every KFS eDoc starts with an initiator. Once the initiator has completed and submitted an eDoc it will route to the first approver. Once all approvers have taken the required actions the eDoc will become final. For more information on workflow please visit our Workflow page.

To use the AD HOC RECIPIENTS tab to add an approver, enter the approver’s UCInetID into the PERSON field.

After the approver’s UCInetID has been entered, the ACTION REQUESTED drop down can be used to select APPROVE, FYI, or ACKNOWLEDGE.

Users should keep in mind that not all KFS eDocs have APPROVE as an option. Some eDocs only allow FYI or ACKNOWLEDGE Ad Hoc actions.

Once the ACTION REQUESTED has been selected the ADD button must be selected to successfully add an approver.

The approver that was added using the AD HOC RECIPIENTS tab will not appear in the route log until after the document has been submitted.

Approve: If an eDoc is routed to someone with an Approve request, that eDoc will not route to the next approver or become Final until the requested approval has been obtained.

Ad Hoc of either Acknowledge or FYI will not interrupt the regular routing process, and payments and transactions will post to the ledger.

•   Some eDocs do not allow Ad-Hoc routing as it will delay the routing of the document.

•  Ad-Hoc Routing to a Fiscal Officer who is already in the route log will take away the Fiscal Officer’s ability to edit the Document Description and Accounting Lines.